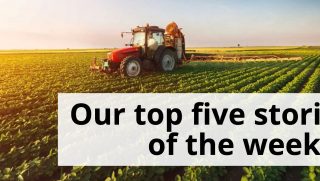 The top five AGDAILY stories of the week … did you follow the action? This week we feature an inspiring young Vermont farmer, firefighter, and FFA’er; Before the Plate gives us a sneak peak of their film; and the Farm Babe proves you can’t judge a book by its cover. Don’t miss a moment at AGDAILY. Sign up and push your passion for agriculture further! 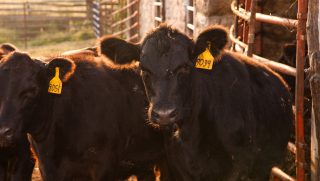 Six farm families were recognized for not only being some of the nation’s best cattle and livestock operations, but also for their stewardship and conservation efforts during the 2017 Cattle Industry Summer Business Meeting last week. This year’s Environmental Stewardship regional winners will compete for the national award, which will be announced during the Annual Cattle Industry Convention in Phoenix, Arizona, in February 2018.

“The desire to leave the land better than they found it is a common trait among cattle raisers,” says Dave Owens, beef marketing specialist with sponsor Dow AgroSciences. “You certainly see that in action in the families that are being honored with this award. They’re all making a real, on-the-ground difference in protecting and improving the environment.”

National Cattlemen’s Beef Association President Craig Uden echoed the sentiments of Owens, explaining that cattlemen and women across the nation take their commitment to the land, air, and water resources in their care very seriously.

“The men and women who raise livestock in this country are the original stewards of the land. We know that we are only successful when we take the best possible care of the natural resources with which we’ve been entrusted,” said Uden, “We understand the importance of improving those resources and leaving them better for future generations. Each of the families being honored are outstanding examples of what is possible for the beef industry and they serve as an inspiration for producers everywhere to continue improving their stewardship practices now and in the future.”

The AGDAILY Digest delivers the most interesting and engaging farming news right to your fingertips.

You have been succesfully registered!
Jul 14, 2017
Lifestyle ● Livestock
Read 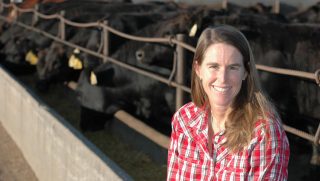 “Feed Yard Foodie” blogger and cattlewoman Anne Burkholder has been selected for the National Cattlemen’s Beef Assocation inaugural Advocate of the Year award.

A Florida native, Burkholder moved to Nebraska with her husband in 1997 to run a family feed yard that had been in her husband’s family since the 1970s. Since then, the mother of three started a successful blog entitled “Feed Yard Foodie” and works for Progressive Beef to ensure that its supply chain is producing high-quality, sustainable beef.

While many beef advocates grow up with an agricultural background, Burkholder grew up in Palm Beach County, Florida, a self-proclaimed jock, and attended Dartmouth University where she majored in psychology. This unique perspective allows her to relate to consumers who may not be familiar with beef production.

“Managing a feed yard for 20 years inspired me to learn to identify and fill meaningful gaps. With thousands of cattle relying on me each and every day, recognizing if an important gap existed between the care that I offered and what the animal needed was absolutely critical for good welfare. This same philosophy of working to ‘fill the gap’ extends to all of the areas of my life including beef advocacy,” explains Burkholder. “A gap clearly exists between the truth of how beef is raised and the general consumer knowledge of the beef industry. As someone actively engaged in caring for cattle and raising beef, it is my job to help fill that gap with truthful information.”

Burkholder’s passion for communicating with consumers led her to become an early graduate of the Masters of Beef Advocacy (MBA) program. She has taken that training, paired with her firsthand experience, to another level over the years partnering with the beef checkoff as a spokesperson. She has participated in national media interviews and high-profile panel discussions to share beef’s positive story with consumers around the country.

“Feed Yard Foodie is a natural extension of me — It is an “Anne Gate” that creates appropriate transparency as I try to bridge the seemingly unending chasm between urban and rural America. I truly believe that ‘together we are stronger’ and my advocacy efforts focus on finding common ground with those that were not granted the blessing of living on a farm,” said Burkholder.

Burkholder is no stranger to awards. She was awarded the BEEF Magazine Trailblazer award in 2014, she was named to Vance Publishing’s 40 under 40 in agriculture in 2013, and in 2009, she was awarded the Beef Quality Assurance Producer of the Year award. 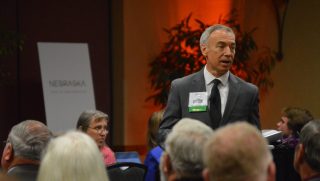 “Our work has only just begun in delivering results for the people of American agriculture, and the experience and leadership skills of Stephen Censky will only enhance our efforts,” Perdue said. “He will bring enthusiasm and a dedication to this country which will be great assets to USDA’s customers.  I am extremely pleased with the nomination for this key position and am hopeful that the Senate will take it up in short order.”

Following the nomination, the American Soybean Association offered its strong support. Censky has led the association as CEO since 1996.

“Steve has guided our organization for 21 years and in that time he has proven himself as an effective, dedicated and visionary voice on behalf of soybean farmers nationwide. Nobody in agriculture is better equipped to assist Secretary Perdue in meeting the needs of farmers with practical solutions than Steve. He is a perfect fit for this role and we give him our strongest endorsement,” said Ron Moore, ASA president from Roseville, Ill.

The transition would mark a return to both Washington and USDA for Censky. Prior to his service at ASA, he served at USDA in the administrations of Presidents Ronald Reagan and George H.W. Bush, including as administrator of the Foreign Agricultural Service. Censky came to Washington originally as a legislative aide to then-Senator Jim Abdnor of South Dakota.

“ASA is better and stronger because of the work of Steve Censky,” said Richard Wilkins, ASA chairman from Greenwood, Del. “He has helped us grow through our advocacy for farmers in Washington, and our service to them in their communities. We will be sad to lose his leadership, but glad to know that it will benefit millions of Americans who rely on the work of the department every day.”

“One of the best things I did as ASA president was to hire Steve as our CEO,” said John Long, a farmer from Newberry, S.C., and ASA’s president when Censky was selected as CEO in 1996. “When Steve came to ASA, our industry was beginning a period of rapid growth. Since then, our acreage has grown by more than 20 million acres, we have established soybeans as the leader in American agricultural exports, and foreign markets abroad have been greatly expanded through trade agreements and marketing, especially in China. The use of soy in biodiesel and biobased products has grown from virtually zero to become significant markets, and soybeans have become a program crop under the Farm Bill. We’ve seen the widespread adoption and acceptance of agricultural biotechnology, and built soy demand in markets around the globe. These are the good works and the legacy that Steve leaves at ASA. They are his successes and ours.”

The Senate Agriculture Committee has not announced when it will hold a hearing on Censky’s nomination.